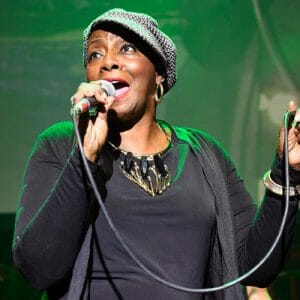 Debbi Blackwell-Cook is an actress and singer whose experience spans years and the globe including stage performances on Broadway and at Washington, DC’s John F. Kennedy Center For The Performing Arts. Debbi has serenaded the late Pope John Paul in Vatican City, Rome, sung backup vocals for Michael Buble, and sung alongside r-n-b crooner Luther Vandross and smooth jazz artist Will Downing before they were spotlighted as solo performers in their own right. Debbi has garnered coveted multiple New York City AUDELCO and received the AUDELCO award for Best Actress in James Weldon Johnson’s GOD’S TROMBONES. Debbi has also performed on the acclaimed television sitcoms A DIFFERENT WORLD and SISTER, SISTER as well as the PBS specials A QUESTION OF COLOR and as Juniper in MY OWN TV. 2010 presented an addition to Debbi’s project repertoire when she sang at the wedding of Phil Collen, lead guitarist Def Leppard/Manraze & her god-daughter, New York costume designer/photographer Helen Simmons. Phil and Debbi began singing and performing locally in southern California including a rousing performance at Gerson’s Institute in San Diego. The public request for more music was enthusiastic and instantaneous. Debbi made her debut with Phil on Manraze’s 2012 single Take On The World, theme song for film director Mark Sloper’s documentary ‘I, Superbiker: The Showdown’. Debbi continued to record with Manraze and is featured on 2 out of 3 songs on the supergroup’s 2013 EP titled ‘I SURRENDER’. The public’s demand for more music from Debbi and Phil has resulted in an extreme blues project titled ‘DELTA DEEP’ which consists of Phil and Debbi’s soulful vocals and harmonies intertwined in Delta blues melodies. ‘DELTA DEEP’ was released as a self titled album in 2014 and followed with club tours and festivals.